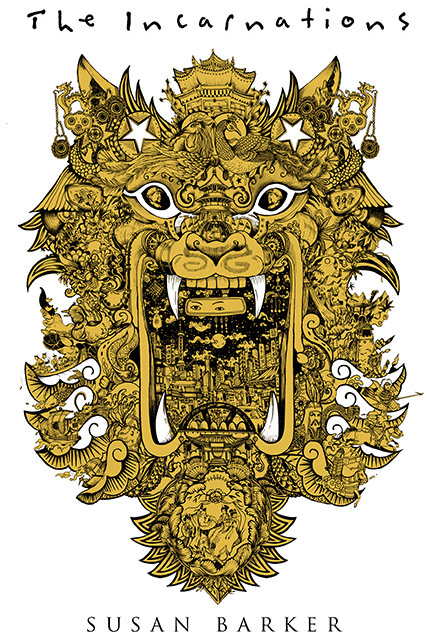 Hailed by The New York Times for its “wildly ambitious and mesmerizing storytelling,” The Incarnations is a “brilliant, mind-expanding novel” (Chris Cleave) about a Beijing taxi driver whose past incarnations haunt him through searing letters sent by his mysterious soulmate.

“Who are you? you must be wondering. I am your soulmate, your old friend, and I have come back to this city of sixteen million in search of you.”

So begins the first letter that falls into Wang’s lap as he flips down the visor in his taxi. The letters that follow are filled with the stories of Wang’s previous lives—from escaping marriage as a spirit bride, to being a slave on the run from Genghis Khan, to living as a fisherman during the Opium Wars, to being a teenager on the Red Guard during the Cultural Revolution—bound to his mysterious “soulmate,” spanning one thousand years of betrayal and intrigue.

As the letters continue to appear, Wang becomes convinced that someone is watching him—someone who claims to have known him for over one thousand years. And with each letter, Wang feels the watcher growing closer and closer…

Seamlessly weaving Chinese folklore, history, and literary classics, The Incarnations is a taut and gripping novel that sheds light on the cyclical nature of history as it hints that the past is never truly settled.

“Astonishing, amazing . . . It’s the small sagas of Chinese history contained in the letters, together with Barker’s vivid descriptions of today’s China, that set this book apart as a work of considerable, if unnerving, importance. . . . Tightly wound, intensely wrought, fantastically exciting . . . Beguiling, readable, intense . . . The book’s stellar narrative carries us briskly along.”

“Wildly ambitious . . . [Barker’s] dazzling use of language and natural storytelling gifts shine from every paragraph. As with David Mitchell, whose books can similarly hopscotch through times and places, each episode stands alone as a terrific tale in itself. You can become so immersed in one story that you have to almost physically drag yourself away to commit to the next. . . . Mesmerizing storytelling.”

“Multi-layered and masterful. Suspend your disbelief, flow along with this wonderful book, like the crazy traffic flowing around Beijing’s six ring roads…

Susan Barker delivers a masterful ending. This would have been a good book if it had simply recounted a series of bizarre tales and stopped, but a bittersweet final revelation poses more questions, reveals deeper dimensions and sends the reader back to the beginning searching for clues missed the first time round”

“The Incarnations’ reads as China’s Midnight’s Children. An utterly remarkable novel, it is certainly a very different book from Rushdie’s, but just as important in its historical and cultural sweep.

Barker’s storytelling is lively and addictive despite the bleakness of her histories. She has an eye for the absurd and darkly comic.”

“[A] stunning epic . . . Barker’s historical tour de force is simultaneously sweeping and precise. . . . Effortlessly blends the past with the present, dark humor with profound sadness. Barker’s psychologically nuanced characters and sharp wit turn the bleakness and the gore into something seriously moving. A deeply human masterpiece.”

[A] kaleidoscopically imaginative novel…Barker stitches together an unnervingly perceptive portrait of China and of the enduring influence that its past has on the present.

“[Barker] has smartly structured this intricate tale, and its mystery pulls us forward. . . . The novel gains in power as it progresses. . . . Close to the end, I found myself stalling – prolonging suspense.”

“Perfect fodder for summer’s waning, Barker’s novel is grim and gripping, a yarn for the ages.”

“A dazzling tapestry of epic scope . . . [An] ambitious, enthralling tale, a deft melding of past and present, myth and reality, longing and torment.”

“Barker makes Wang and his city as vividly real–and disturbing–as any of the other versions of China. . . . One of the novel’s many structural pleasures is watching Barker slowly reveal the connections between Wang’s seemingly simple life and the other lives the letter writer reveals.”

“British writer Susan Barker’s remarkable new novel is ambitious in scope, scholarly in depth and absolutely riveting… Part history, part love story, with good doses of horror, comedy and philosophy, it is ultimately a thriller and a page-turner. In less capable hands, such a daring undertaking could so easily have flopped, but Barker has polished it well and the reader never so much as glimpses the cracks in the magic that is fiction writing.”

“Barker resembles David Mitchell in the ability to weave together past and present in a convincing, and ultimately intriguing, manner.”

“Fantasy and thriller collide in this novel from Susan Barker… Brutal yet seductive, this journey through the darkest parts of the human spirit will leave readers with chills running down their spines.”

“Part historical fiction, part mystery, part portrait of China today, The Incarnations is a powerhouse of a novel.”

“[Barker] skillfully combines history, the supernatural and the everyday in a novel that suggests that the past is never really past, while providing a cracking good read.”

“This is a beautifully structured novel, and the interspersed letters describing previous lives are engrossing and sharp. These past lives are too real to feel like mere metaphor. Cruelty, betrayal and slavery reoccur over the centuries, and are echoed in Wang’s modern life.

The prose is light and often witty, and the characterization is one of the book’s most impressive aspects… This is an extremely satisfying and intelligent book”

“A thrilling journey through a thousand years of obsession and betrayal, this is the most extraordinary work of imagination you’ll read all year.” Adam Johnson, Pulitzer Prize winning author of ‘The Orphan Master’s Son’.

‘‘An extraordinary novel. Erudite, intriguing and compulsively readable, THE INCARNATIONS takes the reader on an intimate and mesmerizing journey through Chinese history. Susan Barker, a born storyteller, has written one of the most remarkable novels of recent years.”  John Boyne

“A brilliant, mind-expanding and wildly original novel – it took me on a journey of a thousand years and delivered me back with all my polarities reversed.”  Chris Cleave

“Barker has that rare contortionistic imagination possessed only by the finest Chinese literary legends such as Wu Cheng’en and Yu Hua… China is alive and deeply soulful under Barker’s knowing pen, making me want to revisit this mystic land of much enchantment.” Da Chen, New York Times bestselling author of ‘Colors of Mountains’ and ‘Brothers’